If you’re visiting or living in Peru and happen to pick up a new 1 Sol coin, you may notice an unusual figure opposite the traditional Peruvian crest. A turkey? Or more specifically the Pava Aliblanca, the “White-Winged Guan.”

The return from extinction

Characterized by the 9 white feathers on its wingtips, this guan is all too familiar with near extermination. In fact, until its rediscovery in 1977, the Pava Aliblanca was declared extinct by the scientific community

Living in the dry forests surrounding Piura (northern Peru) these birds live in a world that is in constant threat of disappearing. Combine indiscriminate hunting by humans plus an abundance of natural predators, and the uninterrupted reality of these white-winged creatures seems bleak.

But they’re not gone yet! 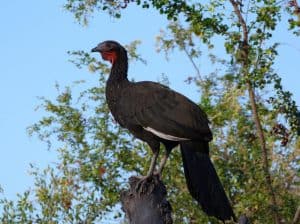 Along with the release of these coins on June 14th, 2018, impactful efforts are being made to pull this native Peruvian bird out of danger. The local community of Chongoyapehas “Santa Catalina” donated 34,000 hectares of territory in the Pava Aliblanca’s natural habitat. Becoming the Chaparrí Private Protected Natural Area, this is now the main location for breeding and reintroduction efforts. Any successful releases add greatly to the 250 animals left in the wild.

The conservation work focuses on raising baby chicks born in captivity and preparing them for releases. It has been proven to be a difficult, but manageable, task. Recently scientists surveying the protected land documented the birth of three chicks. The parents of these chicks were born in captivity but were freshly released into the wild. Basically, a great success!

Hopefully with efforts such as these, and the awareness brought about by the new Sol, Peru will be able to keep their native species around for years to come.

The Pava Aliblanca is the fifth coin of the “Endangered Wildlife of Peru” series. It joins other creatures such as the Crocodiles of Tumbes and the Spectacled Bear.  Learn the full list of creatures from El Commercio Peru