The mighty Amazon, the longest river in the world that unites the people that live in the heart of the rainforest, crosses this region. Its forests grow on white sands and are home to an extremely diverse array of flora and fauna. In Loreto you will find exotic places to visit such as the Pacaya Samiria National Reserve with its pink dolphins and the Allpahuayo Mishana National Reserve, which has different types of soils and native birds. 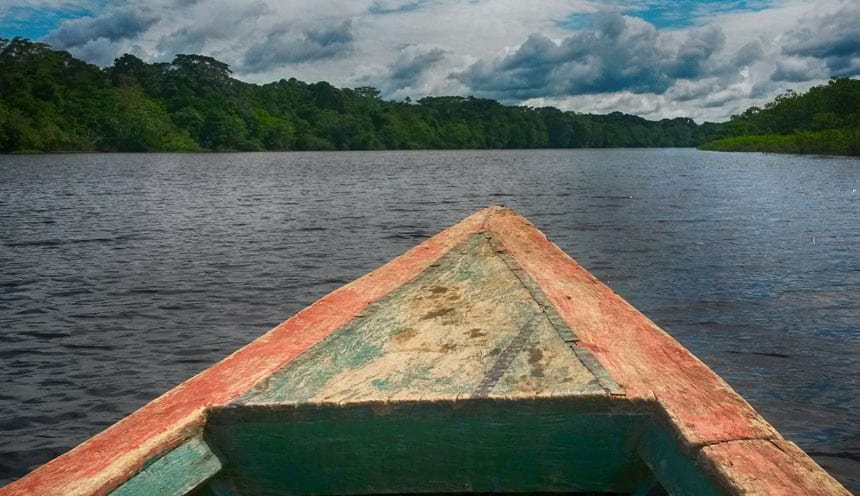 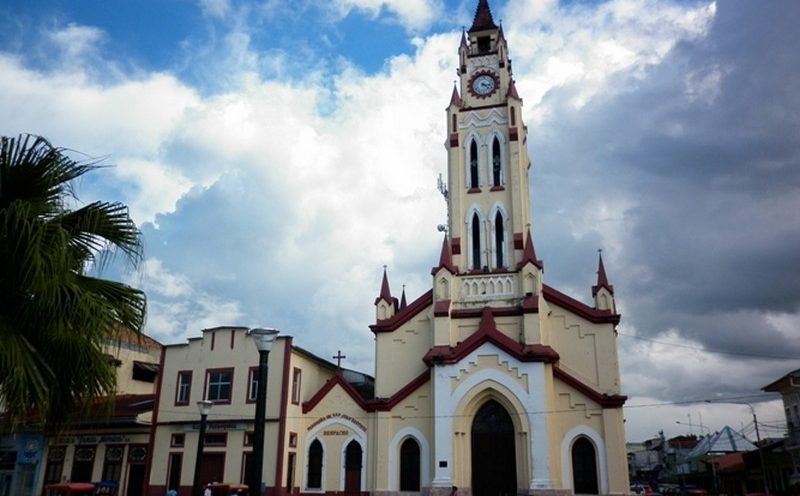 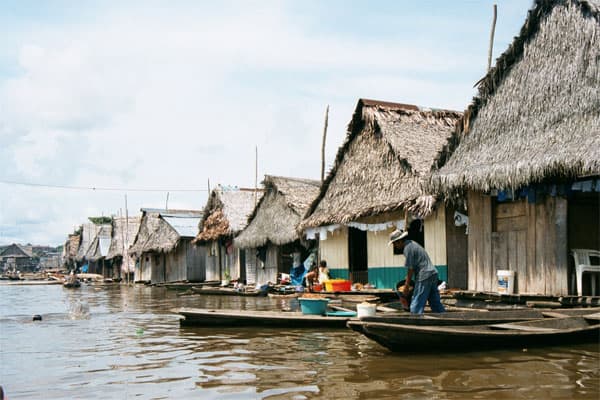 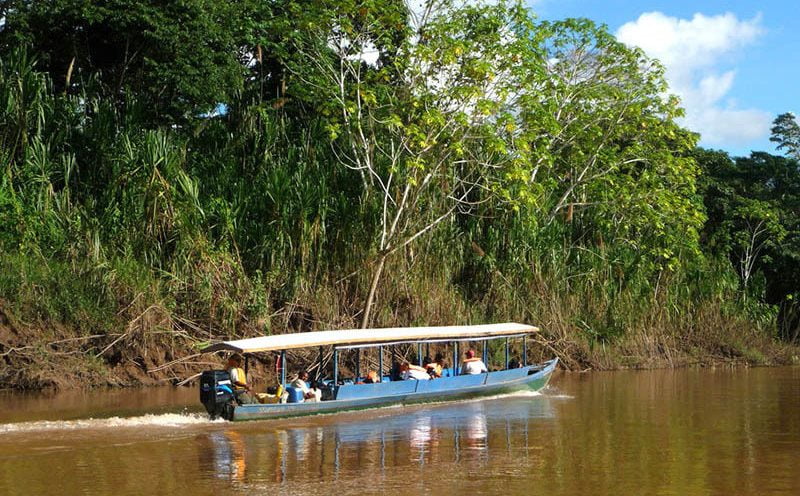 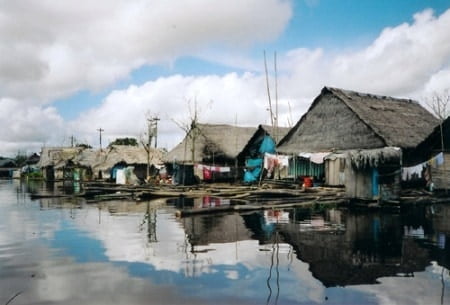 Main attractions in the city

A church in the neo-Gothic style, built between 1911 and 1924. It has just one nave with a carved wooden pulpit on the right-hand side. A fascinating detail is the Swiss clock, installed in 1925.

Its origins date back to the beginning of the 20th century, and it comprises homes built on top of balsa wood rafts that float on the waters during the flood season. Over time, and as the population increased, the building pattern changed to fixed houses built on wooden slats (talafitas) and stilts up to two floors high: during the dry season, both floors are used, while during flood seasons only the second, higher floor can be used, as the entire lower area is flooded, and local inhabitants travel in boats and canoes, which is why the area is often referred to as the “Venice of Loreto”. Tourists can take riverboat trips along the Itaya and Amazon rivers. Belén is made up of two areas: the high zone, where the market and main product supplier are located, and the low zone, an informal port and busy centre of trade movement for products from the jungle.

Located near the Quistococha lagoon. The complex comprises 369 hectares of natural forest, with an artificial beach where visitors can swim, sunbathe and enjoy its white sands and beautiful scenery. Tourists can enjoy trips across the lake in rowing boats and walks around its outskirts.

Designed at the peak of the rubber industry boom in memory of the fallen heroes from the War of the Pacific. One block from the Plaza de Armas, on the banks of the Itaya river, it offers breathtaking panoramic views of both the area and the floating neighbourhood of Belén. Walking around the area, visitors can see important historical monuments, restaurants and cafés. The esplanade has been redesigned with broad pavements, small plazas with gardens and a unique type of bandstand, which is a monument to biodiversity and the myths and legends of the Amazon region.

Main attractions outside the city

The right bank of the Nanay is ideal for swimming or canoeing amidst beautiful scenery.The small Corrientillo lagoon is nearby, where traditional stews can be sampled.

During the dry season (July – November), when the level of the Nanay river drops, beautiful white sand beaches appear, providing the perfect place for swimming and camping. One of the most stunning spots in the area around Iquitos.

Home to more than 20 varieties of exotic butterfly in an beautiful habitat of tropical flowers. It is possible to visit and watch the interesting butterfly reproduction process, as well as see many medicinal and ornamental plants. In addition, it is a rescue and rehabilitation center for wild animals such as monkeys, sloths, orangutan or jaguar, land and marine tortoises, spectacled caiman, manatee, parrots, etc.

A Natural Wonder of the World. With over 500 navigable tributaries, with an average depth of 50 metres and a width of between 4 – 6 km. A large part of the river is defined by its lack of a definite course, due to it being formed by a collection of small channels that constitute a network of canals featuring many islands. It is the largest flowing river in the world, with an enormous and unique river network due to its size and flow. It was discovered in 1542 by the Spaniard Francisco de Orellana, and is most easily accessible from Iquitos. The area includes the Amazon river Tourism Corridor, which offers a wide variety of both flora and fauna. Numerous boat trips are also offered, including visits to the source of the Amazon river, the Pacaya Samiria National Reserve and some arrive here from as far away as the borders with Colombia and Brazil. It is also possible to visit the Bora, Yahua and Witoto ethnic communities in Pucaurquillo, as well as some rural communities. In the surrounding areas, there are Ecotourism hostels to suit all tastes, from those looking for a comfortable stay (rooms with air conditioning) to those seeking to enjoy an extreme adventure. These oases in the middle of the jungle are departure point for walks to see medicinal plants, visit native communities and go on bird-watching expeditions. Tourists also have the opportunity to walk along the canopy walkway or hanging bridge along the tree canopy, from where one can truly appreciate the beauty of the Amazonian fauna.

The reserve covers large parts of the Loreto, Requena, Ucayali and Alto Amazonas provinces, making it one of the largest in the country and the whole of South America. It is also the largest area of protected floodable forest in the Amazon, and bordered by two large rivers: the Marañón to the north and the Ucayali-Puinahua Canal to the south. There are three river basins within the reserve: the Pacaya, Samiria and Yanayacu-Pucate basins, as well as numerous lagoons, ravines, creeks and streams. The area has an average temperature of between 20°C (68°F) and 33°C (91°F) and annual rainfall of between 2,000 and 3,000 mm, which accounts for its great biological diversity: 449 species of bird, 102 mammals (including the pink dolphin), 69 reptiles, 58 amphibians, 256 types of fish and1,024 wild and cultivated plants. The reserve is a shelter for threatened or endangered species including the Giant South American turtle (Podocnemis expansa), the Peruvian spider monkey (Ateles sp.), the giant otter (Pteronura brasiliensis), the scarlet macaw (Ara macao) and cedar trees (Cederla odorata), among others. There are also various projects focused on the protection and management of natural resources, including the repopulation of the Giant South American turtle and Taricaya turtle on artificial beaches in the reserve. Witnessing the final stage of the process, when the animals are released back into the rivers, ravines and lagoons, is a breathtaking moment. Over 42,000 people live in 94 towns on the edges of the Pacaya Samiria reserve, on the banks of the Marañón and Ucayali rivers, and a further 50,000 live in 109 towns in the buffer zones. The main activities are fishing, agriculture, harvesting and hunting.